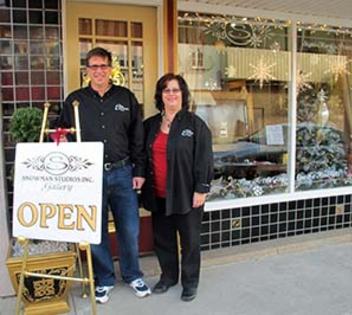 Snowman Studios Inc. is primarily a service-based company that provides artistic services and entertainment to central Illinois. Located in rural Canton, the artists have developed studios for SIGNS, MURALS and RESTORATION. The location is also home to Snowman's Reindeer Farm, which provides seasonal art & craft classes as well as animal education sessions. You can download and read the information below to learn more about our company. You will also find a link to the application form. We keep all applications on file and review them when a position becomes available.

Snowman Studios Inc. is an Equal Opportunity Educational Institution and EEO/Affirmative Action Employer committed to excellence through diversity.  Employment offers are made on the basis of qualifications, and without regard to race, sex, religion, national or ethnic origin, disability, age, veteran status, or sexual orientation.

1989: Scott and Tracy Snowman began doing freelance graphic design, murals and sign work out of their home in Springfield, IL. The couple moved back to their hometown of Canton, IL in the summer of 1989 after finishing their first master’s degrees at Sangamon State University (now University of Illinois at Springfield) majoring in Art and Children’s Literature.

1993: The Snowman's built a home near Canton Lake in the summer of 1993. This location was designed to include space for the corporate office as well as studios for painting, drawing, signs and murals.

2009-2011: Tracy and Scott Snowman met Mr. Bill Cook of Bloomington, IN for the first time. They were commissioned to paint four large murals for installation on the south side of Fulton Square (JCPenney building). The murals were completed in the summer of 2010 and dedicated in September. Later in 2011, the Cook group commissioned the couple again to create a 14’x20’ mural to be installed behind the new boutique hotel being built near the square in downtown Canton.

2011: Snowman Studios became Snowman Studios Inc. as of January 1, 2011 with Tracy Snowman as President and Scott Snowman as Vice-President. In July of 2011 the Snowman’s purchased 35 South Main (which also includes 35 ½ South Main) and began renovations on the one-story building. Snowman Studios Gallery, opened on November 10 with a private showing for family and friends. The first regular day of business was Friday, November 11 (11/11/11). The Canton Chamber of Commerce grand opening was held on Tuesday, November 15.

2015-2016: The corporation purchased two reindeer in August of 2015. The new venture expanded Snowman Studios Inc. into agricultural tourism with the goal being to bring more people into Fulton County to shop and explore. Snowman’s Reindeer Farm is a seasonal part of the company located at the corporate office, 25599 East Middle Lake Road. This site is home to reindeer pastures, a visitor’s center (which showcases Snowman Studios Inc. services and the downtown gallery) and a gift shop. The company also travels with the reindeer to various locations for short visits at the discretion of the owners. In 2016 and 2017 the company will be creating a mobile cocoa and coffee stand called The Flying Reindeer Café. Employees are hired to work at the gallery and/or the Reindeer Farm depending on what positions are available and what is needed at various times of the year.

2017: By the summer of 2017 the sign and mural services needed more space so additional changes were made at the corporate office location to accommodate the growth. The downtown location was sold to enable the company to expand the studio space and also invest further in the Reindeer Farm portion of the business.